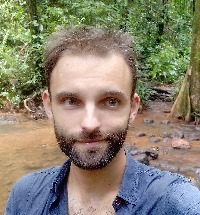 Adrien SELLES holds a doctorate in Hydrogeology on understanding the groundwater circulations on an active volcano in Indonesia and became a researcher at BRGM in 2015. Between 2015 and 2020, he was the French team leader of the Indo-French Center on Groundwater Research (IFCGR) in Hyderabad (India), a bilateral collaboration between BRGM and the National Geophysical Research Institute (NGRI) specializing in the hydrogeology of crystalline aquifers. For a year, he held the post of Regional Hydrogeologist in French Guiana for the BRGM with a mission to support public policies for prospecting drinking water supplies. Since the end of 2021, he has been working as a Hydrogeologist at BRGM Montpellier.

His main research work focuses of the development of conceptual models on the hydrogeological functioning of volcano-sedimentary and fractured basement aquifers. His work, which is often multi-disciplinary, includes the treatment of spatialized piezometric chronicles, compared to groundwater uses. He also works on aquifer recharge issues (managed or natural). He participated in the satellite images processing to estimate extraction volumes in semi-arid environments (in South India in particular).

The eastern flank of the Merapi volcano (Central Java, Indonesia): Architecture and implications of volcaniclastic deposits

Merapi volcano in central Java Island is considered to be the most active and dangerous andesitic volcano in Indonesia. The volcanic history of Merapi volcano is complex, and often perturbed by frequent episodes of eruptive edifice building and subsequent erosion and collapse. In this paper, we present a detailed field, literature, and GIS-study of the well-preserved eastern flank of Merapi, which has been spared from major eruptions, in order to reconstruct the geologic and geomorphic history of the edifice. Here, the most recent deposits arise from the remobilization of the old volcanic materials by lahar, gravitational collapse of massive lava flow and local landslide processes.

In this study, we describe the specific deposits and subsequent alteration and removal processes. The stratigraphic analysis was performed with respect to the distinct phases of construction due to eruptions and dismantling of the volcano by erosion, gravitational collapse and the associated local to distal re-sedimentation. Based on GIS analysis and field surveys, a drainage network anomaly was detected in two main rivers, the Soka and the Brambang Rivers. We infer that an apex fan of volcaniclastic material was deposited into a central paleo-Pusur river and explains the abnormal divergence of the rivers. A new lithological 3D conceptual model is proposed based on the characterization of the lithological facies and their temporal and spatial evolution along the eastern flank of Merapi volcano.

seismicity (RTS), where the world’s largest triggered earthquake of M6.3 occurred in 1967.

directions respectively. The sustained seismicity in the region and its correlation with the

Koyna and Warna reservoir loading cycles has been a subject of study for several decades.

the Deccan Volcanic Province (DVP) of India; the Ghats, at average heights of 700-800 m,

are formed from 1 km thick pile of Deccan basalts.

data has been used for the Konkan plains to the west of the Western Ghat Escarpment (WGE),

orthophotos acquired over an area of 1064 sq km (~25 cm accuracy) was used. Surface

has provided depth control to the configurations of the features seen on the surface. Structural

and hence, the paleo and present stress patterns.

from analysis of seismological data from a local broadband network, operational since 2005.

Compilation of this large multi-parametric dataset has yielded significant correlations

between the surface and subsurface structural patterns, which form crucial inputs to model the

and fracture physics. Advancements in understanding the processes of earthquake genesis is

This work is supported by a research grant from the Ministry of Earth Sciences, Govt. of

Indian agriculture relies on monsoon rainfall and irrigation from surface and groundwater. The interannual variability of monsoon rainfalls is high, which forces South Indian farmers to adapt their irrigated areas to local water availability. In this study, we have developed and tested a methodology for monitoring these spatiotemporal variations using Sentinel-1 and -2 observations over the Kudaliar catchment, Telangana State (~1000 km2). These free radar and optical data have been acquired since 2015 on a weekly basis over continental areas, at a high spatial resolution (10–20 m) that is well adapted to the small areas of South Indian field crops. A machine learning algorithm, the Random Forest method, was used over three growing seasons (January to March and July to November 2016 and January to March 2017) to classify small patches of inundated rice paddy, maize, and other irrigated crops, as well as surface water stored in the small reservoirs scattered across the landscape. The crop production comprises only irrigated crops (less than 20% of the areas) during the dry season (Rabi, December to March), to which rain-fed cotton is added to reach 60% of the areas during the monsoon season (Kharif, June to November). Sentinel-1 radar backscatter provides useful observations during the cloudy monsoon season. The lowest irrigated area totals were found during Rabi 2016 and Kharif 2016, accounting for 3.5 and 5% with moderate classification confusion. This confusion decreases with increasing areas of irrigated crops during Rabi 2017. During this season, 16% of rice and 6% of irrigated crops were detected after the exceptional rainfalls observed in September. Surface water in small surface reservoirs reached 3% of the total area, which corresponds to a high value. The use of both Sentinel datasets improves the method accuracy and strengthens our confidence in the resulting maps. This methodology shows the potential of automatically monitoring, in near real time, the high short term variability of irrigated area totals in South India, as a proxy for estimating irrigated water and groundwater needs. These are estimated over the study period to range from 49.5 ± 0.78 mm (1.5% uncertainty) in Rabi 2016, and 44.9 ± 2.9 mm (6.5% uncertainty) in the Kharif season, to 226.2 ± 5.8 mm (2.5% uncertainty) in Rabi 2017. This variation must be related to groundwater recharge estimates that range from 10 mm to 160 mm·yr−1 in the Hyderabad region. These dynamic agro-hydrological variables estimated from Sentinel remote sensing data are crucial in calibrating runoff, aquifer recharge, water use and evapotranspiration for the spatially distributed agro-hydrological models employed to quantify the impacts of agriculture on water resources.

An Observatory of Groundwater in Crystalline Rock Aquifers Exposed to a Changing Environment: Hyderabad, India

Multi-scale and long-term work is needed for tackling the scientific challenges found in areas vulnerable to climate change and anthropic pressure. This is the case in the semi-arid and drought-prone regions of southern India where freshwater is scarce, and agriculture near fast-growing cities is triggering high water demand. The Indo-French Center for Groundwater Research (IFCGR) was established in 1999 between the Indian National Geophysical Research Institute (CSIR-NGRI) and the French Geological Survey (BRGM), at the NGRI campus, Hyderabad. For almost 20 years, the IFCGR has studied the hydrodynamic properties and associated hydrological processes in crystalline aquifers. To that end, the Center set up two sites for observing groundwater in crystalline rock aquifers: (i) the Maheshwaram basin for the study of groundwater management at catchment scale and (ii) the Choutuppal experimental site for the detailed study of hydrogeological processes at local scale (between wells). Multi-scale approaches allow characterizing the hydrodynamic and transport properties of the shallow weathered part of such crystalline aquifers and the implications for groundwater management under overexploitation conditions. The objective is to provide suitable definitions of aquifer properties for developing modelling and management tools applicable to such heterogeneous aquifers.

To overcome water scarcity issues, Managed Aquifer Recharge (MAR) structures are currently developed in many parts of the world, including poorly permeable terrain like weathered crystalline rocks. In such geological context, characterized by relatively limited groundwater storage mainly associated with fractures located at the interface between the upper weathered layer (saprolite) and the fractured bedrock, the efficiency of MAR is poorly known. To address this question and better understand the factors that control recharge dynamics, an artificial recharge basin was implemented at the Experimental Hydrogeological Park in Telangana (South India), a well-equipped and continuously monitored site situated in Archean granitic terrain. The thickness of the saprolite and hydraulic properties are relatively well known all over the site from previous geophysical surveys and hydraulic tests.

To characterize recharge dynamics, recharge has been monitored in different boreholes surrounding the infiltration basin. Infiltration rates and water level data are interpreted by both a volume balance approach and different analytical solutions. In addition, a simple numerical model was used to show how the depth of the permeable interface between saprolite and granite controls recharge dynamics and observed water levels variations. Results show that the permeability of the saprolite/bedrock interface is sufficiently large to allow an efficient recharge that propagates laterally throughout the aquifer through this well connected interface. However, the variable depth of this permeable pathway controls the water level response, acting as a semi-impervious boundary, leading to remarkable water level variations. Thus, our findings show how the characteristics of the most permeable pathways control recharge dynamics in weathered crystalline rocks. In addition, we show how the depth variations of the permeable interface between saprolite and granite may be inferred from the monitoring of water level during recharge events.

Heat as a tracer in fractured porous aquifers is more sensitive to fracture-matrix processes than a solute tracer. Temperature evolution as a function of time can be used to differentiate fracture and matrix characteristics. Experimental hot (50 °C) and cold (10 °C) water injections were performed in a weathered and fractured granite aquifer where the natural background temperature is 30 °C. The tailing of the hot and cold breakthrough curves, observed under different hydraulic conditions, was characterized in a log–log plot of time vs. normalized temperature difference, also converted to a residence time distribution (normalized). Dimensionless tail slopes close to 1.5 were observed for hot and cold breakthrough curves, compared to solute tracer tests showing slopes between 2 and 3. This stronger thermal diffusive behavior is explained by heat conduction. Using a process-based numerical model, the impact of heat conduction toward and from the porous rock matrix on groundwater heat transport was explored. Fracture aperture was adjusted depending on the actual hydraulic conditions. Water density and viscosity were considered temperature dependent. The model simulated the increase or reduction of the energy level in the fracture-matrix system and satisfactorily reproduced breakthrough curves tail slopes. This study shows the feasibility and utility of cold water tracer tests in hot fractured aquifers to boost and characterize the thermal matrix diffusion from the matrix toward the flowing groundwater in the fractures. This can be used as complementary information to solute tracer tests that are largely influenced by strong advection in the fractures.