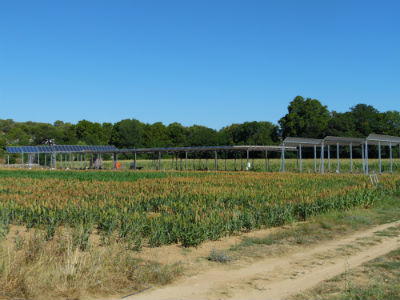 © Elamri Y.: The agrivoltaic devices of  Lavalette experimental platform. On both sides, dynamic devices (inclinations of variable panels) and in the center, devices with fixed inclination.

Agrivoltaism, defined as the association on the same land of agricultural and photovoltaic energy production, appears as an innovating concept to dampen some of the effects of climate change, in the agricultural sector. Although the concept was already imagined in 1982, the first experimentations started in 2010 at Montpellier (France) and showed the relevance of this combination by the maintenance of crop yield under certain conditions, the increase of land use efficiency and a reduction of water consumption for the tested crops. Following this pioneering work done under fixed (but not horizontal) photovoltaic panels, the use of "dynamic" panels, i.e. panels with a variable tilting angle, appears necessary to reduce the spatial heterogeneity of the transmitted radiation but also to adapt the shading strategy to the radiation amount required for crop growth. 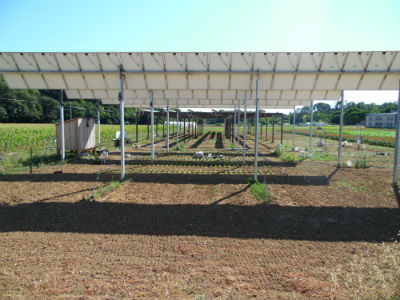 This thesis aims to characterize and to model the impact of the photovoltaic panels on the water budget of the  cultivated plot and to progress towards the optimization of irrigation strategies in such systems controlled by the variations in time of the tilting angle of the panels. Experimentations conduced on lettuces showed the benefits of "dynamic" photovoltaic panels to reduce the radiative heterogeneity.  Accounting for rain redistribution by the solar panels permits the implementation of a real time strategy to reduce rainfall heterogeneity on the ground surface. The derivation of a water budget and crop development model which describes the dynamics of stomatal conductance under fluctuating shading allows a better simulation of water consumption and crop development for different shading strategies. Finally, various strategies for the piloting of the solar panels could be tested and evaluated by a new, global index combining land use efficiency, water productivity, maturity delays and heterogeneities (in rain and radiation) which can impact production.