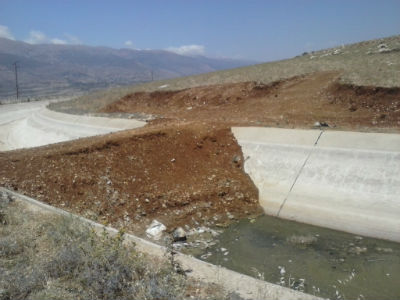 Channel 900 (West Bekaa) built by the state to distribute water from Lake Karaoun is no longer operational because of the pollution of the lake. It is now used as a reservoir by farmers who bring water from their private boreholes

This thesis develops a critical analysis of the water policies in Lebanon with a focus on the irrigation sector. It takes the Upper Litani River Basin as a case study covering the agricultural plains of the Bekaa region and specifically questions the planning policies adopted by the Lebanese state in the irrigation and agriculture sectors. The thesis is based on the theoretical framework of Water Governance and analyses the visions, stakes and interests of the different parties that were involved in the development of the hydraulic policies, from as early as the Ottoman period (the end of the 19th century) until the present moment. It covers the French Mandate and the constitution of the Republic of Lebanon (1920-1943), the years following the independence (1943-1975), the civil war (1975-1990) and the reconstruction period (1990-present). In addition to the historical approach adopted and the study of the available literature, it is based on a long empirical study of four years, aiming at confronting the state’shistorical and contemporary objectives in water planning, to the reality of water management and access to water at the local level. The thesis develops three main chapters: The first analyses the construction of the planning policies at the level of the basin as a whole and studies their impact on water allocation to the different projects. The second analyses the development and management of a public irrigation system designed as part of the state planning policies; While the third analyses the development and evolution of the private irrigation systems managed by the local communities in a specific part of the basin and highlights the contrast with the recent public water policies presented by the state in the drinking water sector. 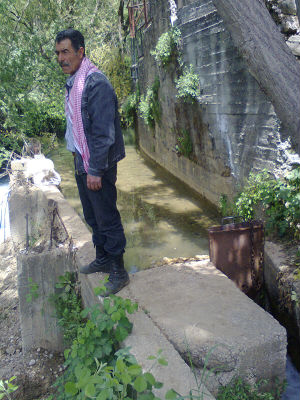 One of the three "Chawa" (Canal Guards) of the Qabb-ELias Community Irrigation System (Central Bekaa). This age-old system, powered by the karst source of Ras El Ain, is still managed by the community of this ancient village of Bekaa. However, the source of Qabb Elias is becoming less and less abundant, prompting the community to move towards the use of groundwater as a supplement. © M.H. Nassif