The State of Ceará in Brazil depends mainly on the water resources stored in its reservoirs (“açudes”). While most açudes are private and relatively small, the larger ones are generally community-based or public-owned.

© Daniela Henriquez E. : Irrigated Perimeter “Morada Nova” after the water cut from Banabui dam. To the left, area abandoned and no more irrigated and to the right, rice culture irrigated with well water.

The question of the equitable distribution of water within a sub-watershed involves complex hydrological, environmental, and political issues depending on the spatial configuration and the interdependencies between these reservoirs. But the allocation of water is also reasoned at State level because the metropolitan region of Fortaleza, which concentrates half of the population and 85% of its economic activity, depends largely on transfers from the Jaguaribe basin. 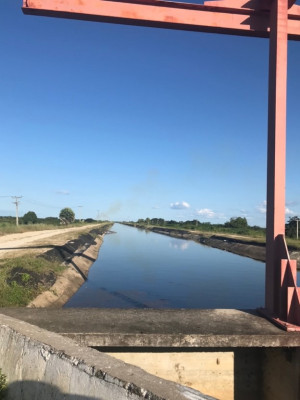 © Daniela Henriquez E. : Part of the “Canal do Trabalhador” (Worker Channel). Infrastructure to provide water to the city of Fortaleza. It was constructed in 1993 as emergency action to avoid a water cut in the city.

In view of these interdependencies, the objective of this thesis is to understand what adaptation strategies are implemented by the State and local actors, in particular farmers according to the types of existing agricultural systems, to allocate water in times of scarcity and how these different types of responses impact the availability and socio-territorial distribution of water resources.

To do this, we will study the spatial and social distribution of the costs and benefits and the risk associated with water management regimes. This will lead us to analyze in more detail the articulation between local arrangements and the formal system of water rights (outorgas), as well as the functioning and transformations of the river basin committees for the allocation of the resource.

This thesis will also question how the different types of irrigated agricultural systems have responded to recent water shortages according to their water, social, political, economic, and territorial characteristics.